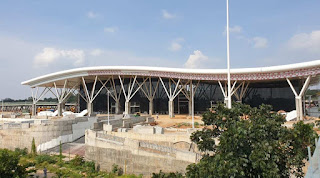 India First Air Condition Railway Station
The Railway ministry recently confirmed that the railway station is fully functional and working. This is the first Air Conditioner station in India. There are other facilities too available on this station like:- 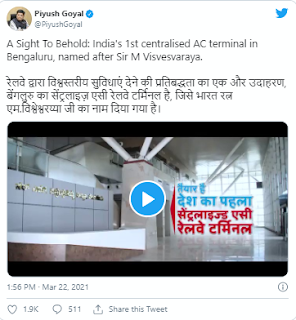 This is one of the steps to modernizing the Indian Railway and boosting the infrastructure of the railway. The railway is the lifeline of India and one of the common ways of transportation used by hundreds of commuters on a daily basis.
Earlier there were rumors that Indian Railway might get privatized but the railway minister already disapproved the claim.
There are railway stations under the plan of redevelopment of the infrastructure in order to make them world-class railway stations.
This is the first step to modernize the railway stations and give high-quality services to the passengers. Indian Railways is the lifeline of the country. 22 million passengers use the Indian railway every day, Its s huge number to cater and provide the world-class facilities.
Indian Railway currently developing 123 stations to make them high-standard platforms. The estimated budget for this is estimated to be around Rs 50,000 crore.

It is a very tiring and difficult job to calculate heat load capacity of the area where it is very tough to maintain the temperature due to frequent passengers coming in and out.
In order to find out the heat load, we need to remove the bottlenecks which can cause cooling loss. Other than that estimated number of people is very important to know the heat load per person. As we are building railway station for one time we need to estimate the number of people which are going to raise for next 10-15 years.
There are multiple new technologies that are in the market which we can consider here like VRF which saves more energy but we need to compare and study with the Chiller. Need to access both the options cost-wise and running efficiency-wise.
We can also follow the foot step of an airport where already high-quality air conditioners are installed and run by efficient companies. We can study their HVAC layouts and it can be a great effort if we can find the best out of it.
Following the same simple steps, we can find out the ducting arrangement and machines they used for cooling such big halls. How much percentage of fresh air they have considered with the chilled air, is the point of the study.
We can take the recent example of metro stations which are well air-conditioned and ventilated. I have seen myself how they kept the open ceiling and you can see how each and every duct they have placed and work is done perfectly. People never felt suffocated or discomfort in the metro station complex.
It is a very good thing that the government has started modernizing the railway station in order to give the best experience to the passenger. Earlier only AC class passengers had the facility to wait for their train in an air-conditioned waiting area but now every passenger can take that advantage.
But thing need to focus on fare charges, comfort is always comes with the cost. We need to check if Indian government is going to improvise the fare or going to maintain the same. Indian railway is the lifeline of the country. One small decision can change the lives of many.

What is Portable Air Conditioner?

Which AC is better for the least power consumption and more cooling ?

We love WordPress and we are here to provide you with professional looking WordPress themes so that you can take your website one step ahead. We focus on simplicity, elegant design and clean code.